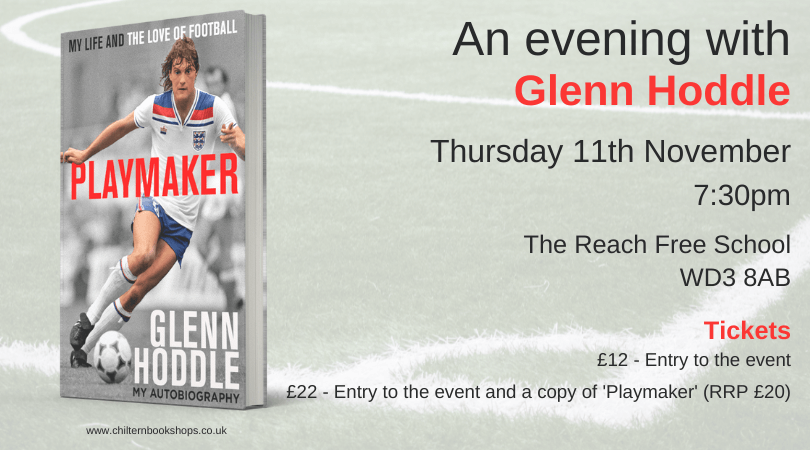 We are thrilled to invite you to an evening with Glenn Hoddle, one of the most celebrated footballers of his generation.

A wonderfully talented No. 10 – he formed part of the great Spurs teams of the early 1980s and cut his teeth in the blood of thunder of an England team that prioritised aggression over creativity.

Often seen as a player ‘out of time’, Glenn was a playmaker in the purest sense. A creator and a goal scorer, he rose through the Tottenham youth academy – playing under Keith Burkinshaw and crossing paths with the likes of club legends Bill Nicholson and Danny Blanchflower – before going on to play in Monaco under the tutelage of Arsène Wenger. In Playmaker, he looks back on his rise as a prodigious young footballer and talks at length about his career that took him from cleaning the cockerel at White Hart Lane to managing the England football team at a World Cup.

From scoring in an FA Cup final to winning the league in France; from revitalising Chelsea in the early 1990s, to managing the fall-out after David Beckham’s infamous sending off at the 1998 World Cup; from surviving a near fatal cardiac arrest at the age of 61, to continuing to work within the game he loves – Playmaker is a life lead through football, and an autobiography of one of the game’s most admired, thoughtful and respected personalities.