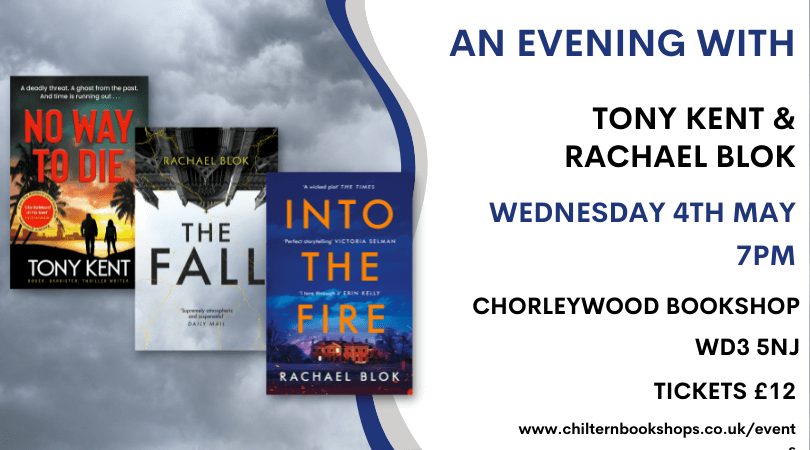 Get ready for a thrilling evening with two fantastic authors!

Tony Kent and Rachael Blok will be chatting about their writing (and of course brilliant new books) in the intimate surroundings of Chorleywood Bookshop.

No Way to Die – Tony Kent

When traces of a radioactive material are found with a body in Key West, multiple federal agencies suddenly descend on the scene.

This is not just an isolated murder-a domestic terrorist group is ready to bring the US government to its knees.

The threat hits close to home for Agent Joe Dempsey when he discovers a personal connection to the group. With his new team member, former Secret Service agent Eden Grace, Dempsey joins the race to track down the bomb before it’s too late. But when their mission falls apart, he is forced to turn to the most unlikely of allies: an old enemy he thought he had buried in his past.

Now, with time running out, they must find a way to work together to stop a madman from unleashing horrifying destruction across the country.

Into the Fire – Rachael Blok

In a stately mansion in the Hertfordshire countryside, sisters Lois and Ebba throw a launch party for their new venture: Archipelago, a virtual reality game. In attendance are their celebrity investors including a glamorous British couple, a brooding Swedish financier, a Dutch banker and his film star wife, and a controversial politician.

But beneath the glamorous surface, there are sordid secrets that include steamy affairs, deals in dirty money and anonymous death threats. So when eight of the guests are involved in a helicopter crash, it quickly becomes clear that it was no accident. It was murder.