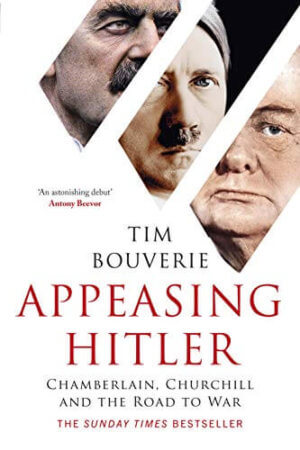 Come and hear Tim Bouverie, historian and journalist, talk about his book and Sunday Times Bestseller, Appeasing Hitler: Chamberlain, Churchill and the Road to War, the first significant narrative history of appeasement and a compelling reappraisal of one of the most controversial episodes in history.

On a wet afternoon in September 1938, Neville Chamberlain stepped off an aeroplane and announced that his visit to Hitler had averted the greatest crisis in recent memory. It was, he later assured the crowd in Downing Street, ‘peace for our time’. Less than a year later, Germany invaded Poland and the Second World War began.

This is a vital new history of the disastrous years of indecision, failed diplomacy and parliamentary infighting that enabled Nazi domination of Europe. Drawing on previously unseen sources, it sweeps from the advent of Hitler in 1933 to the beaches of Dunkirk, and presents an unforgettable portrait of the ministers, aristocrats and amateur diplomats whose actions and inaction had devastating consequences.

Having studied history at Oxford, Tim worked in historical and political documentaries before joining Channel 4 News, where he worked as a political journalist alongside Michael Crick. Over Tim’s four and a half years he covered almost every significant political event, including two General Elections, the Scottish and EU referendums.

Tim regularly reviews history and politics books, and has written for the Spectator, Observer and Daily Telegraph.