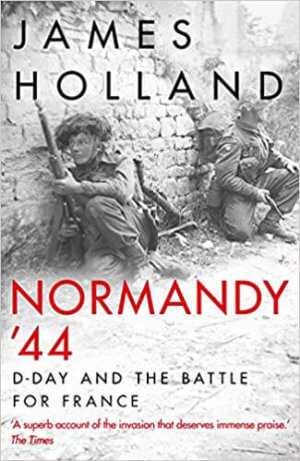 James Holland, historian, writer, broadcaster and author will be visiting us to discuss his most recent book, “Normandy ’44”

D-Day and the 76 days of bitter fighting in Normandy that followed have come to be seen as a defining episode in the Second World War. Its story has been endlessly retold, and yet it remains a narrative burdened by both myth and assumed knowledge. In this reexamined history, James Holland presents a broader overview, one that challenges much of what we think we know about D-Day and the Normandy campaign.

The sheer size and scale of the Allies’ war machine ultimately dominates the strategic, operational and tactical limitations of the German forces. This was a brutal campaign. In terms of daily casualties, the numbers were worse than for any one battle during the First World War.

Drawing on unseen archives and testimonies from around the world James introduces a cast of eye-witnesses that includes foot soldiers, tank men, fighter pilots and bomber crews, sailors, civilians, resistance fighters and those directing the action.

James Holland is the author of a number of best-selling histories, including Fortress Malta, Battle of Britain, Dam Busters and is two volumes into his ground-breaking history of World War Two, The War in the West. He is a regular commentator on TV and Radio for all things World War Two and can also be found on TV covering anniversary’s and special events, most recently RAF100 but also D-Day 70, VE Day 70 and Battle of Britain 75.