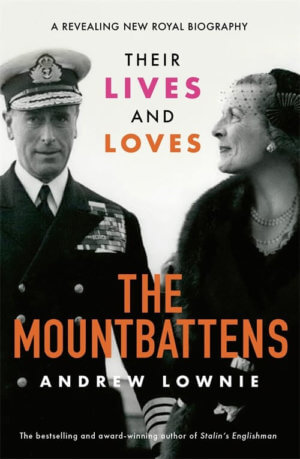 Welcome back the prize-winning and best selling historian Andrew Lownie and his new book to mark the 40th anniversary of the assassination of Lord Mountbatten by the IRA.

The book draws on four years of research around the world and tells a story worthy of Hollywood with all the key figures of the era. From Churchill and Montgomery to Roosevelt and Eisenhower as well as the Duke of Windsor, George VI, the Queen, Prince Philip and Prince Charles, Charlie Chaplin, Noel Coward, Salvador Dali, George Gershwin, Joan Crawford, Fred Astaire, Barbara Cartland, Grace Kelly and Merle Oberon. The book reads like a “Who’s Who” of the Second World War.

This is an account of an unusual marriage which, whilst beset with infidelities, was also a loving and mutually supportive one. It also reveals much new information on many of the controversies of Mountbatten’s career from the disastrous 1942 Dieppe Raid to the rapid transfer of power in India in 1947 as well as his murder in 1979.