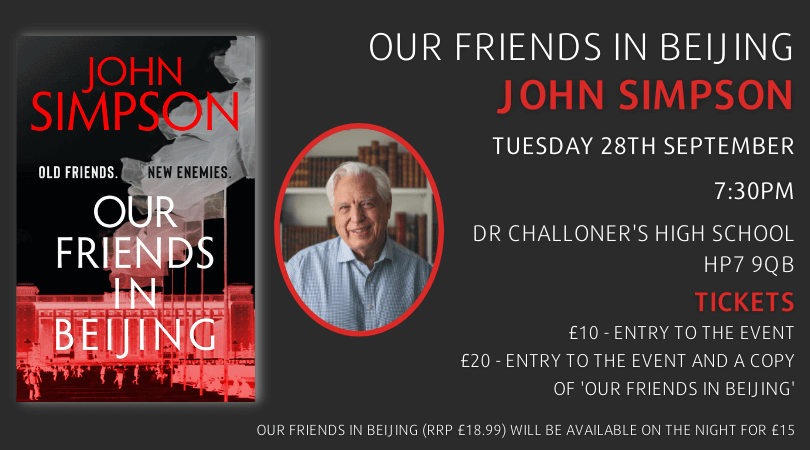 We’re delighted to be welcoming back veteran foreign correspondent John Simpson, who’ll be talking about his new novel Our Friends in Beijing.

Jon Swift is in trouble again. His journalism career is in freefall. He is too old to be part of the new world order and he has never learned to suck up to those in charge. But experience has taught him to trust his instincts.

When, for the first time in years, Jon runs into Lin Lifeng in a café in Oxford he wonders if the meeting is a coincidence. When Lin asks him to pass on a coded message, he knows it’s not. Once a radical student who helped Jon broadcast the atrocities of Tiananmen Square, Lin is now a well-dressed party official with his own agenda.

Travelling to Beijing, Jon starts to follow a tangled web in which it is hard to know who are friends andwho are enemies. As he ricochets across the country, Jon seeks to make sense of the ways in whichChina’s past and present are colliding – and what that means for the future of the country and theworld. Under the watchful eyes of an international network of spies, double-agents and politicians, all with a ruthless desire for power, Jon is in a high-stakes race to expose the truth, before it’s too late.