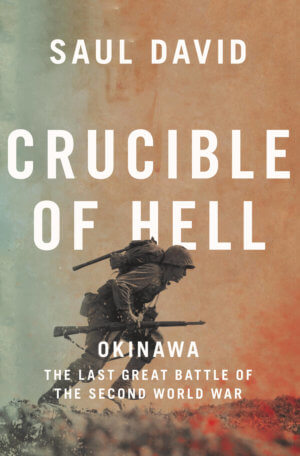 Gripping, even gruesome, yet deeply moving, Crucible of Hell sweeps us masterfully from a coral charnel house in the Pacific to the mushroom cloud over Hiroshima. David Reynolds

Too often missing from Western-centric narratives of the Second World War, this 82-day blood-soaked clash in the Pacific had profound consequences not only for the war but for the modern world, ultimately leading to President Truman’s decision to deploy the atomic bomb.

For the ferocity of the fighting and the loss of life on both sides to the pivotal, war-ending consequences of its outcome, the assault on Okinawa has no match. The bloodiest battle of the war’s action in the Pacific, of the 300,000 pre-war population of Okinawa half were killed, committed suicide, or went missing. On the US Navy’s side, the dead exceeded the wounded.

From the brutal barrage of the kamikaze attacks to the horrific mass suicide by Japanese civilians, encouraged by soldiers to kill their families to save them from American hands, Saul David brings together a sweeping overview from all sides with fraught military action and masterful attention to detail, capturing the ferocity of the battle and illuminating a truly shocking, tragic and often forgotten episode of history.